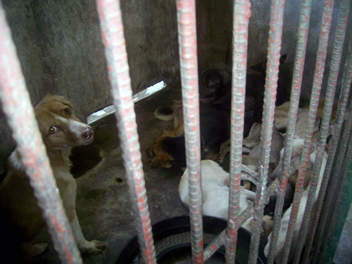 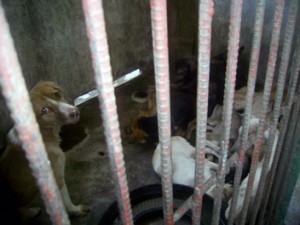 Bacolod, Philippines – “When the police officers arrive, these dogs will be executed as scheduled,” informs Mr. Rex Juplo, officer in charge of the Bacolod City Veterinary Office at around 12:30 noon, in response to a request if they could wait for the adopter to arrive that afternoon.

There are 24 stray dogs inside the dog pound; 2 are dogs with breed, each housed separately in an individual cell. Juplo adds the 22 native dogs or “askals” are lumped together in single cells.

There are approximately 8 native dogs cramped in a one cell, 10 in another, and a couple more in 2 cells.

Juplo says that 22 dogs are scheduled to be euthanized that day except for the black dog with breed which has a prospective adopter.

An offer was made by concerned citizen, Charmaine Dacles to adopt the 22 native dogs that afternoon.

The City Ordinance 184 of Bacolod City indicates that stray dogs unclaimed in the dog pound are to be euthanized within three days. Since Doctor Dave Arceo of Philippine Animal Welfare Society came to have a talk with Mayor Bing Leonardia of Bacolod City, on October 22, 2010 on the cruel treatment of the strays in the pound; the illegal car gas emission method of euthanasia or “tambutso” gassing has been stopped, according to Juplo. He adds that the dogs are now shot in the head, instead, by police officers from stations 1 or 6, using registered guns.

Juplo says the dogs are now fed once a day; they purchase one 50 kilo sack of rice per month depending on the number of dogs. A sack of rice costs approximately Php 1,200. The city budget allotted for the pound remains the same at Php 500,000 annually.

There are almost 1,000 dog bites per month in the city, according to Juplo with zero human rabies cases or deaths but 4 positive dog rabies cases for 2011. The city has a population of 54-55,000 dogs.

Juplo claims they resumed dog-impounding only in January 2011 after the “tambutso” news broke out. They concentrated on mass vaccination and have vaccinated already 35,000 dogs for 2011. Juplo adds that from January to August 2011, they have impounded only 62 dogs.

“There has been no electricity for 4 months, ” Juplo adds, stressing the difficulty his men face daily in bringing water inside the pound. It will be October before they can afford to buy a transformer.

The annual Php 500,000 funding the pound receives has not been augmented by Mayor Leonardia.

The strays look emaciated; some have rib cages protruding visibly. The dogs appear infested with lice; the cages smell of excrement.

“These dogs bite, are diseased and unadoptable,” stresses Nimfa Magallanes, Clerk 3 of the City Veterinary Office, barring entry to the dog pound and suggesting Dacles come back another day.

She adds that they cannot print the adoption papers today as there is no electricity.