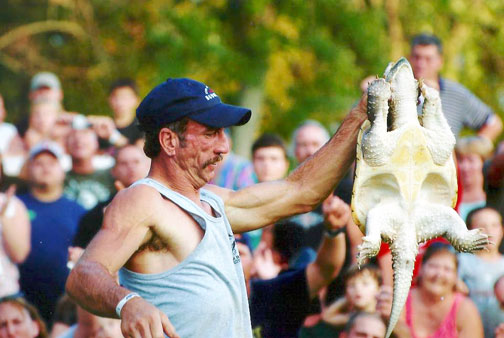 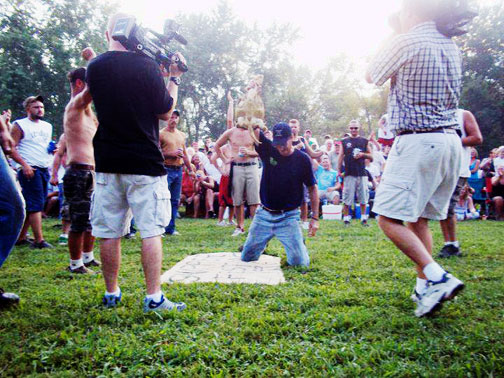 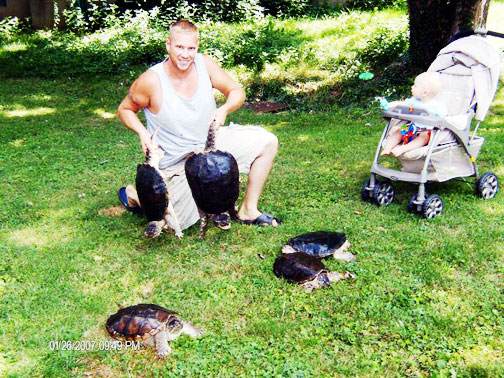 The competition consists of timing men on how quickly they can pull a snapping turtle from a tub of murky water, run across a lawn and force – or, as Reeves describes it, “coax” – its head out of its shell far enough to grab it by its neck. Women are timed in a relay race to carry a soft-shell turtle across a lawn.

• Carrying a turtle by the neck could break its windpipe, esophagus and vertebrae.

• Moving a turtle too quickly or roughly can cause intestinal injuries.

• Dropping a turtle can injure its skeletal system, particularly its legs and neck. It could also cause jaw or facial injuries. “If there is a recent, unhealed injury to the shell, it can make the injury worse by increasing the fracture or splitting a soft area that is healing,” La Prees adds. A turtle’s shell is living tissue and can feel pain. Cuts and tears can occur to the outer edges of the softshell turtles’ shells; fractures to bones located near the center of the shell are possible. Skin infections can result from soft tissue exposure.

• Digging their fingers into the soft tissue to extract the turtle’s head could cause neck, eye and/or nose injuries.

Because they are cold-blooded with slow metabolism, turtles are slow healers. “Returning injured or sick turtles to the wild is tragic,” says La Prees, who recommends that fractures be treated by a qualified exotic veterinarian prior to rehabilitation. Broken bones will disable a turtle, making it easy prey or leading to drowning if it cannot move properly through water. Eye injuries will render it unable to find food. Further stress is caused due to the fact the turtle is unable to function normally.