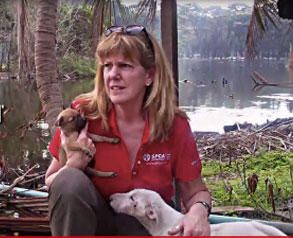 NEW YORK–(BUSINESS WIRE)–SPCA       International, a non-profit organization dedicated to reducing       animal suffering and abuse internationally, announces that the       devastating impact of historic floods and deadly aftermath continues to       effect the animal population in Thailand. SPCA International’s recently       released video, filmed by their Emergency Rescue Team on the ground in       Thailand, shows just how devastating local conditions are for countless       animals who are living in deplorable conditions. SPCA International’s       work with local partner, Soi Dog Foundation, is making a real difference       according to rescue workers on the ground. Thus far, the SPCA       International relief efforts are providing: thousands of dollars in       medical supplies, repairs to critical fencing at shelters damaged by the       floods, spay and neuter efforts to prevent more unnecessary suffering,       and continued support for Soi Dog Foundation’s vital rescue work.       Additionally, SPCA International is pulling together local partners to       work on improving living conditions at what is known as the “Dog Condo”.

“We at SPCA International know this is just the beginning of long and       hard work helping these countless innocent animals still impacted by the       aftermath of the historic flooding in Thailand,” said Stephanie Scott of       SPCA International. “We are grateful to our Emergency Animal Rescue team       that traveled to Thailand and we are asking our supporters to continue       helping as we work to reduce suffering in Thailand.”

SPCA International dispatched emergency staff to Thailand in February to       asses and respond to the crisis       animals are now facing post-flood. Countless animals were killed by the       floods, while thousands of others were rescued by animal organizations       and good Samaritans. Now their plight continues as shelters work to       rebuild. However, some cannot due to lack of funding or will.

SPCA International specializes in assisting animals in areas of conflict       and disaster. During times of natural disaster, political turmoil, war       and man-made disaster, SPCA International is ready to take action for       the protection of animals. Along with partner organizations around the       world, they focus on helping in crisis situations where animals are at       risk or in danger. Video       and news       about SPCA International’s work is available on the group’s Web site, www.spcai.org.