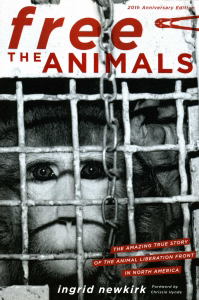 Free the Animals is the riveting, true account of how a group of quite “ordinary” people in America started doing some rather extraordinary things, namely, breaking the law to get chimpanzees and dogs out of laboratories and to rescue pigs from factory farms. Since it was first published in 1992, this electrifying book about the often hair-raising raids carried out by everyday members of the Animal Liberation Underground has inspired tens of thousands of people to see animals in a different light and to take action to help them—from shunning cosmetics that are tested on animals to picketing fur stores to going vegan. The identities of the real-life characters—many of whom are still wanted by law-enforcement authorities—have been changed to protect them from prosecution, but their willingness to defy convention is real and makes compelling reading, the kind of inspirational message that has helped launch a movement of animal lovers into a powerful force. Packed with action and suspense, the new edition, out this month, has been praised by filmmaker Oliver Stone as a “moving story about extreme cruelty and extreme courage and an inspirational and practical guide for anyone bent on challenging the system.” The book includes an introduction by The Pretenders’Chrissie Hynde, who has herself been arrested for her activism for animals. I thought you might be interested in sharing the details with your readers.

Free the Animals tells the story of Valerie, a 23-year-old Maryland police officer whose department was involved in the seizure of the Silver Spring monkeys, an event that was featured on the front pages of The Washington Post and resulted in a case that went all the way to the U.S. Supreme Court, pulling back a curtain on how animals are treated in laboratories, changing the law, and even changing the National Institutes of Health’s policies along the way. Seeing the plight of the seized monkeys, who are slated to be returned to their abuser, Valerie is moved to take direct action and soon finds herself on the other side of the law, leading daring animal rescues across the country.

Free the Animals is available at PETACatalog.com.